...a successful, creative and healthy new year! Enjoy what's left from this year! Email ThisBlogThis!Share to TwitterShare to FacebookShare to Pinterest
Labels: frankdaenen

The 55th episode of Seamour Sheep. 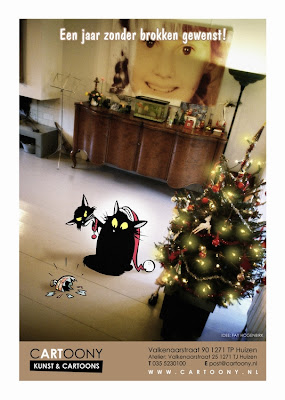 Email ThisBlogThis!Share to TwitterShare to FacebookShare to Pinterest
Labels: pieterhogenbirk

All the best wishes

All the best wishes for the holidays and for 2008 to all of you from Sevensheaven (Metin) and Artylicious (my love Natasja), and special thanks to all Clogworkers who have shared their work with the Clogwork audience in 2007. Let's keep Clogwork alive together in 2008!
Geplaatst door Metin Seven op 15:46 No comments: 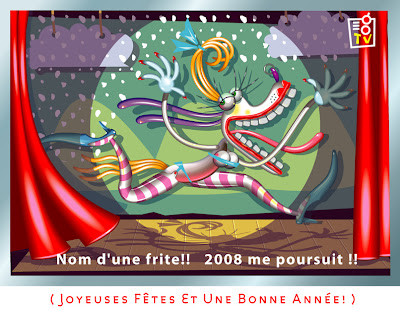 This is the french version, but my warm wishes are global.
Geplaatst door Evert Geradts op 12:13 1 comment:

Again I was asked to do a cover for anti-monarchist magazine ' De Republikein', this time about the consequences a united Europe will have for the crowns on the assorted royal heads, and for their so-called subjects.
Europe, in Greek mythology, was abducted by Zeus in the shape of a bull. ( 'Signal' , the 'Newsweek' of the nazi's, used her and her kidnapping beast as a logo, by the way.)
In my first sketch the king was deemed too positive, too powerful, 'his' people too weak.
The final image is more true to the facts: out of fear of change and loss of independence the people cling to 'their' monarch, not necessarily out of love for the monarchy. 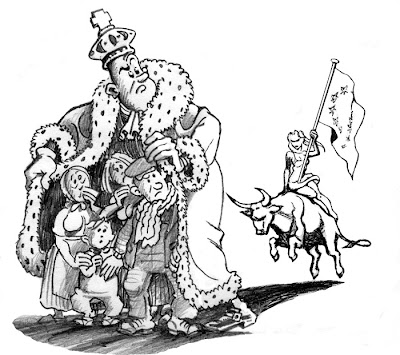 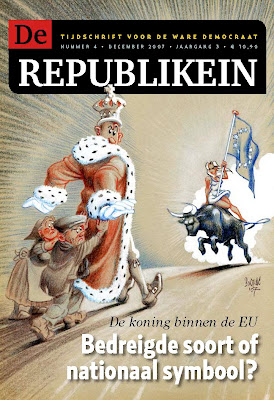 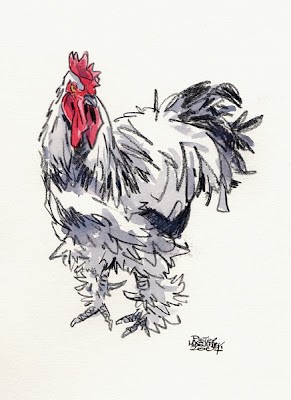 Email ThisBlogThis!Share to TwitterShare to FacebookShare to Pinterest
Labels: pieterhogenbirk

Two illustrations with my crash test dummy character design for a new project. 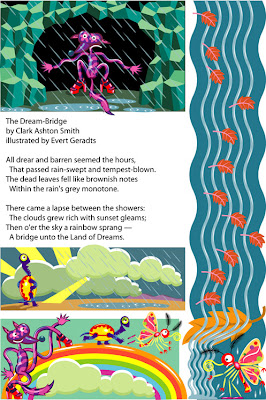 In the first version the little foxy lady had a bright red foxtail, which gave my (mainly male) colleagues on my favorite forum lots of disgusting associations.
But in Illustrator such details are so easy to change, so this is the third and final version.
Oh yes, the text is rough text, which will be embellished by the editor of "Graphic Classics".
Geplaatst door Evert Geradts op 14:57 3 comments:

A 3D exercise in toy figure design. I hope one day he will be realized. 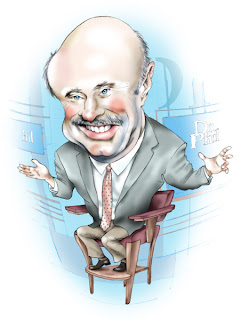 Finally I was drawing someone my friends in the dog park could relate to. It made for a fine subject while slipping and sliding on the ice. And I wasn't even the most elitist dog owner, one woman actually hadn't even ever heard of Dr. Phil. A doctor herself mind you. Which is pretty comforting when you think about it. Now I will stop thinking about Dr. Phil the moment he turns into fish wrapping paper. I don't know, I always get into these imaginary relationships with the people I have to draw, I can't help it. Like with Dr. Phil, jesus. I keep thinking of things in my life that I would have him talk about in his show. That is too creepy to even ask you guys what you would have Dr. Phil talk about regarding your lives. I have way more shit happening than I thought, I could fill (Phil) ten shows. Easy.
Geplaatst door Eliane op 15:01 1 comment:

I’m in the mood for christmas! So I made two cute greeting cards. If you want to buy them: just send me an e-mail (click!) and I’ll send all the information you need. Have a closer look on my Flickr-page!
Geplaatst door Frank Daenen op 22:46 2 comments:

Email ThisBlogThis!Share to TwitterShare to FacebookShare to Pinterest
Labels: frankdaenen

Novels. Novels bore me to death. Always have and probably always will. As a kid I used to read in the big art books we had at home. They were full of wonderful images and amazing stories. Stories about how Géricault kept rotting horses heads under his bed. Stories about van Gogh cutting his ear. Stories about how Lautrec had a custom walking stick made in order to be able to hide booze in it. I couldn't get enough of those stories and I couldn't wait to grow up and become a tortured, neurotic artist myself. I became an illustrator-with-a-communication-disorder instead.
Close enough.

Born near Paris and living nearly twenty years in Amsterdam, I'm a vector addict. In fact: Pierre Bézier is my hero. Furthuremore I'm in love with my drawing tablet, an ageing Wacom Intuos A3 (but that's ok, I'm not getting younger either). That it then. Cheers. 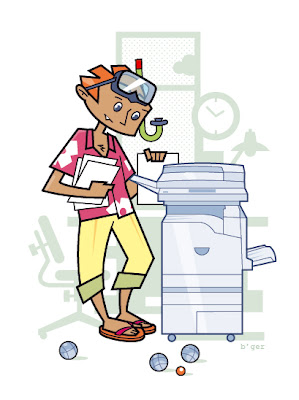 This is a commissioned image about how retaining a "hollyday feeling" after returning to work kan keep people from being stressed and getting ill. 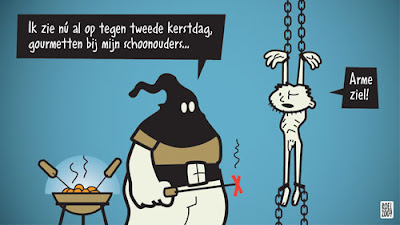 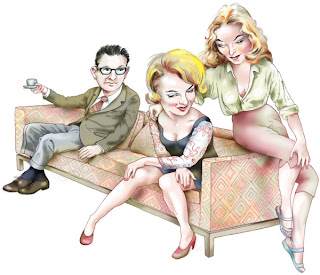 About women who after decades of marriage, come out as lesbians. I found this a tough one to tackle without coming across homophobic or too stereotype. I could have drawn a woman changing an apron for a pair of dungarees, but I have way too many gay friends and relatives, they would have given me hell.
Geplaatst door Eliane op 15:59 5 comments: 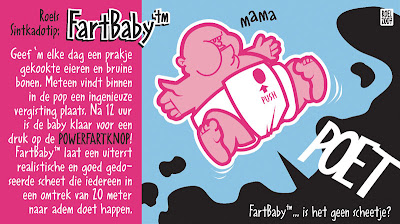 Fartbaby, what a sweet gift for Sinterklaas (dutch Santaclaus)!
Push the POWERFART button and it will produce strong, bad smelling farts that will let you gasp for breath.
Geplaatst door Roel Venderbosch op 10:24 5 comments:

Welcome to Clogwork, an online gallery where a collective of Dutch and Belgian artists exhibit their cartoons, comics and illustrations.

Clogwork is an initiative of Sevensheaven.nl
You're also invited to sevensheaven's other blog MetinSeven.com
The copyright of the displayed artwork is owned by the respective authors, all rights reserved. Permission to use artwork needs to be requested to the author(s) in question.